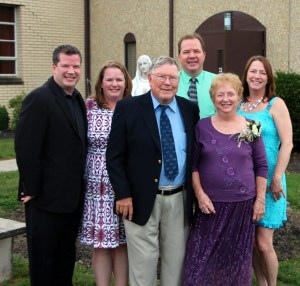 Thomas Patrick O'Keefe (Tom) of Roaming Shores, Ohio, passed away peacefully in his home surrounded by family on November 12, 2019. He went to be with the Lord at the age of 78.He was born on April 30, 1941 in Chicago, Illinois. He was the son of the late John Richard O’Keefe and Mary Rose (Duffy) O’Keefe. Tom grew up in Maywood, Illinois with his brother Jack where he attended elementary school at St. Eulalia. He was involved in Cub Scouts and Boy Scouts where he achieved the rank of Life Scout. Papa Napadano, Tom's grandfather, had a gas station where he often worked.Tom attended Fenwick High School where he was on the swim team specializing in the backstroke. He started driving when he was 15 and eventually started working for Cook County Park service picking up trash. Tom Graduated from Fenwick High in 1959. He enjoyed spending the summers visiting his grandparents in Lake Geneva, Wisconsin. Tom attended Purdue University where he studied electrical engineering. He was a member of Delta Tau Delta fraternity. During one summer, Tom worked for Amphenol Borg during the summer where he met Valerie Wickham, his soon to be wife. He received his bachelor's degree in Engineering at Purdue University in 1963 and married Valerie in 1965.  Tom and Val moved to Oak Creek, Wisconsin, where he worked for the AC Delco Electronics division of GM as a Test Equipment Engineer. During his time at AC Delco he helped design the inertial guidance system for the Apollo Missions, tanks, missiles and the 747.  In 1968, Tom and the family moved to Toulouse, France for a year, where he worked on the supersonic Concorde airplane. Tom was active in the community where he and Val were part of the Jaycees. Tom even found time to complete his Masters in Electrical Engineering from the University of Wisconsin Milwaukee. Tom moved the family to Parkman, Ohio, in 1973, after having transferred to the Packard Electric Division of GM. At Packard Tom worked on many car wiring and connector projects. Tom traveled to Germany and Italy often as he worked in joint projects with Fiat and Cadillac. He also worked with Reinshagen in Germany to design several projects before retiring from GM and Delphi Packard Electric on January 1, 1999. Tom was very active in the Parkman community.  He served on the Zoning board, helped design and open Parkman’s Overlook Park in 1978, served on the board of the Geauga Catholic Charities, and was a member of the Knights  of Columbus. Tom and Val also started the first girls softball team in town. A life-long scout, Tom served first as a committee member, then Scoutmaster of Parkman Boy Scouts Troop 76. The family moved again to Roaming Shores, Ohio in 1989, where Tom served on the Roaming Shores Association Board for 15 years. He championed building of new pools, paving the roads; and improving the community.

Tom is survived by his wife of 54 years, Valerie (Wickham) O'Keefe. His children; Dawn, Patrick (Margie), Tom (Genevieve), and Maureen (Kevin) Simon. Eleven grandchildren including Nick, Meghan, Maxwell, and John Dayringer; Meghan and Ashley Ford; Anna, Michael, and Kevin O’Keefe; Hayden and Blake Simon. Tom is also survived by brother Jack O'Keefe and his children Maggie, Jean, Suzanne, Kaitlin their spouses, and many nieces and nephews. He was preceded in death by his father John, his mother Mary and his nephew Robert.